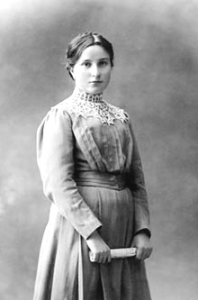 During the last 2000 years, many Catholic mystics have caught glimpses of the Gospel. But only three have perceived a whole vision: Maria of Agreda in the 17th century, Anne Catherine Emmerich in the 19th, and Maria Valtorta in the 20th, right in the middle of World War II. Among them three, Maria Valtorta (1897-1961), a martyred soul from Italy, and a member of the mendicant Third Order of the Servants of Mary, is the only one who has directly transcribed, with her own hand, the many visions of the life of Jesus she had received. She has filled some 9,000 pages in 3 years and 3 months, and sometimes she kept writing for 18 hours without interruption. She thus gave us what is so far the most voluminous biography of Jesus. It didn’t take long before the Holy Office launched an attack against her, and her writings were placed on the Index two years before she died, even though she has never been accused of any dogmatic or moral error.

Since then, saints, beatified people, cardinals, bishops, theologians and renowned biblical scholars, as well as many lay people, have been enthusiastic about the work of this woman, who was chosen by God to give us this « inestimable treasure of universal literature », according to Gabriel Allegra (Macau, 1970), who was the first to translate the entire Bible in Chinese and was beatified in 2012. Pope Saint Paul VI offered her complete work to the archiepiscopal seminary of Milan when he was the city’s archbishop, and Blessed Maria Teresa of Saint Joseph, who was particularly intimate with that mystical woman and exchanged numerous letters with her.

Ten years after her death, some researchers became interested in Maria Valtorta’s writings, which are full of biological, geological, astronomical, topographical and cultural details. To this day, some 16,000 of these details have been proven true, and around a hundred sites which she described (such as Jerash, Bethsaida, the aqueduct of Tiberias, the Kfar Bar’am synagogue, the Masada fortress, the tomb of Hillel, the casemate wall of Jezreel, the dyke of Ptolemais, the Palace of Lazarus…) have been excavated or confirmed thanks to archaeological digs, long after her death.

On a theological level, her work is said to contain 3,133 references to the Septuagint – the version of the Old Testament in use in Jesus’ time – even though Maria Valtorta had not received a higher education and was given her first Bible at the age of 45 only.

Maps (with names of places and routes) produced on the sole basis of the writings of Maria Valtorta :

Scans of the handwritten pages of Maria Valtorta’s notebooks :

This Privacy Policy is intended to tell you about the type of information we collect when you visit www.fabricegagnant.com (“website”) and to explain the manner in which we collect, store, maintain and protect that information.

We may offer features through our website such as online forms. If you choose to use these features, you may disclose “personal information” including your name, email address, mailing address and telephone numbers. In order to better serve you, we may collect and store this personal information on an individual basis.

You acknowledge and agree that you are solely responsible for the accuracy and content of your personal information.

Information that we collect is typically stored on secured servers located in France.

We use personal information and information obtained by electronic communication solely for our own activities and to provide you with best services. We may use the aggregate or statistical website use information for security and maintenance purposes to improve our website and better serve our visitors. We will not sell, rent or lease any of your personal information.

We may disclose information when legally compelled to do so and when we, in good faith, believe that the law requires it or for the protection of our legal rights.

Our website, technology and the law are constantly changing. As a result, we may revise this Privacy Policy in order to respond to those changes, without notice.

Site and contents crafted with all my ♡.

The following text will be sent to our editors: